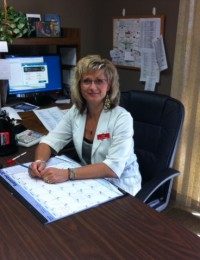 Joan has been with Gardiner Park Animal Hospital since January 2008. She began working in the Veterinary Industry in the 1980’s where she first met Dr. Bardutz.

After marrying her husband Ward, raising three boys, living in different provinces, dabbling in other vocations, such as operating a home-based business, flower designer and a CSR in the banking industry, she finds herself putting on a familiar hat as Office Manger for Gardiner Park Animal Hospital.

Joan finds her role at the clinic both fulfilling and rewarding.

Outside the clinic Joan is very active, she’s always on the go, and by her side you’ll find her little Yorkie “Scooter” who thinks he is the most important member of the family and is spoiled rotten by all.

We are temporarily closed Saturdays - sorry for the inconvenience